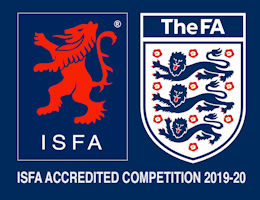 After an exciting season last year with Dulwich securing the 1st XI title and Hampton winning the 2nd XI trophy, the draw for the 2019-20 tournament has been completed and can be found by clicking here.

Perhaps the tie of the 1st Round in both the 1st XI and 2nd XI Cups sees St. John’s travel to City of London.  Results will be updated as the season progress on the website above and also the ISFA website.

Play-by dates for the remaining rounds are as follows:

For further information, please contact Mr Adam Lowe (This email address is being protected from spambots. You need JavaScript enabled to view it.)

The game started at a quick tempo with both teams trying to play a high-pressing game. Hampton had the greater of the possession in the early stages with Maxwell and the Hampton midfield controlling the game, threatening the Dulwich goal on numerous occasions. A smart save at the near post from Dulwich keeper Cosway kept the scores level midway through the first half. Dulwich grew into the game and began to look dangerous on the counter and from set pieces. After 30 minutes, Dulwich took the lead as Buckler powerfully headed home from a corner. Hampton, not phased, levelled after 35 minutes pouncing on a misplaced Dulwich pass before Joash calmly finished from outside the box. 1-1 at half time.

In the second half, Hampton continued in the same vein and began moving the ball around well without creating any clear openings. With 20 minutes to go, Hampton rattled the Dulwich post with a Maxwell header from a corner. The game then began to open up in the final stages and the Dulwich attackers looked to get at the Hampton back line whenever possible. More Hampton pressure followed but the Dulwich defence stood firm with some fantastic tackles and blocks to stop the dangerous attacks. The game ebbed and flowed with both teams trying to find a way through before extra time. Dulwich went close, then Hampton retaliated and had an attack of their own. With time nearly up, Dulwich attacked down the left and after a fantastic cross from Montagu in behind the Hampton defence, Ashton headed home at the back post into the empty net to secure victory for his side. Hampton had one final attack but it wasn’t to be. As the full time whistle went, Dulwich were victorious 2-1 and crowned the 2018/19 London Independent Schools Cup Champions.

Congratulations to both teams on a fantastic spectacle showing off the high standard of football in London Independent Schools.

It was a beautiful setting at Hampton and Richmond Borough Football Club for the 2Xl Cup Final between Forest and Hampton Schools.

Hampton started the liveliest with some early pressure on the Forest goal. However, as the teams settled, Forest then came back into the game and had chances of their own. We could tell by half-time that this was going to be a close match as now very few chances were being created and both teams looking organised in defence giving little away.

In the second half, Forest began to take control and deservedly took the lead after a superb cross from the left by Back, floated to the far post for Ashiru to rise above the defence and power a header in at the far post. This prompted Hampton in to life and they began to have their own period of pressure, going close on a number of occasions. Forest defended resolutely and it did not look like Hampton would get the equaliser until a corner deep into added on time. An excellent delivery from the right side saw the recently brought on substitute Chandler rise above everyone in the crowded box to smash a header past the Forest goal keeper.

All the boys looked exhausted going into extra-time but the commitment and passion from all was clear to see. It looked like it was going to be penalties to decide the winner. However, with a few minutes left on the clock, Hampton scored the decisive goal from an excellently taken corner by Evans and Dwyer getting the final touch which agonisingly for Forest managed to make its way over the goal line and thus a Hampton victory.

This really was an excellent advert for 2Xl Football and a lovely occasion for both sets of lads to finish the season and for some to finish their school football careers. Thank you to Adam Lowe at RGS Guildford for organising.