Habs’ progressed to the next round courtesy of a clinical first half performance, the visitors 4-0 up at half time, which was harsh on the home team. Bedford Modern fought back continually but found Habs’ back line was very resilient which prevented any chance of a second half comeback.

Rossall made a very strong start to the game, taking an early lead after 2 minutes. Rossall dominated possession throughout the game and were rewarded with a second goal part way through the first half. A flurry of goals late on lead to a 4-0 victory for Rossall against a gritty and determined Oldham Hulme.

An outstanding performance from the whole squad saw Truro progress to the next round. Sherborne played some great football, but Truro was clinical in the final third. Scoring 7 goals sealed a good win against an organised team. Sherborne were excellent hosts and dignified in defeat.

Trinity were able to get a foot hole in the game before half time. The King Edwards goalkeeper had pulled out some outstanding saves but at Half time it was 2-0 Trinity. Trinity added to their goal tally in the second half securing a 9-0 win

Merchant Taylor's started the game well, with some very good football. Oswestry got back into the game with some good pressure for 15 minutes. Some nice work down the left saw a cross hit the top corner of the net. 1-0 at half time. Merchant had some good chances in the second half which they capitalised on. The Oswestry keeper had an excellent game making several saves throughout the match. Final Score 3-0 to Merchant Taylors

On their debut appearance in the competition, Reading Blue Coat proved too strong for hosts Clifton College. The opening exchanges saw Blue Coat create a few chances, and their continued threat led to a 3-0 half-time lead. A fine move was finished off clinically extend the lead before Clifton replied. However Blue Coat extended their lead rounding off the scoring, with the game ending 6-1 to Reading Blue Coat.

In the most thrilling Boodles ISFA Cup Final of all time, last year’s runners up, Millfield School, take on first time finalists Queen Ethelberga’s Collegiate at Stadium MK. This final did not disappoint, extra-time, nine goals and end to end action.

Queen Ethelburga’s took an early lead after a through ball was played into the striker who found the bottom corner of the goal from outside the box. This seemed to spur on Millfield, who were quick to equalise through a corner which was headed home. Queen Ethelburga’s soon re-took the lead after a well worked free kick was headed home of the underside of the bar. However, Millfield ensured they went into half time level after some excellent play down the left wing saw a dangerous ball into the box which resulted in an own goal.

In the second half both teams came out determined to take the lead. For 20 minutes excellent end to end football was witnessed with both teams creating opportunities but failing to capitalise or being denied by the fantastic defending and goalkeeping at both ends. Queen Ethelburga’s found a breakthrough and a fantastic strike across goal found the back of the net. Millfield did not give up and with three minutes left on the clock they were awarded a free kick outside of the box which was perfectly whipped into the top right of the goal to level the score, 3-3. The full-time whistle soon followed to confirm extra-time.

In extra-time Millfield did not wait around to claim the lead 4-3 after 3 minutes. Queen Ethelburga’s worked hard determined to get the equaliser but Millfield defended strongly to go into the second period of extra-time in front. However, after a quick drink and turn around Queen Ethelburga’s drew back level less than a minute after kick-off. It was again end to end football as both team hunted for the winner. Penalties seemed more and more likely as the game went on. Millfield found themselves with a goal scoring opportunity as they were awarded a free kick on the edge of the box. They took full advantage and a well-placed free kick was headed home at the back post with two minutes left to play. Queen Ethelburga’s battled looking for that last minute equaliser but the full-time whistle was blown and it was Millfield who are crowned Champions of the 2019-2020 Boodles ISFA Cup. A fantastic final, that really could have gone either way. 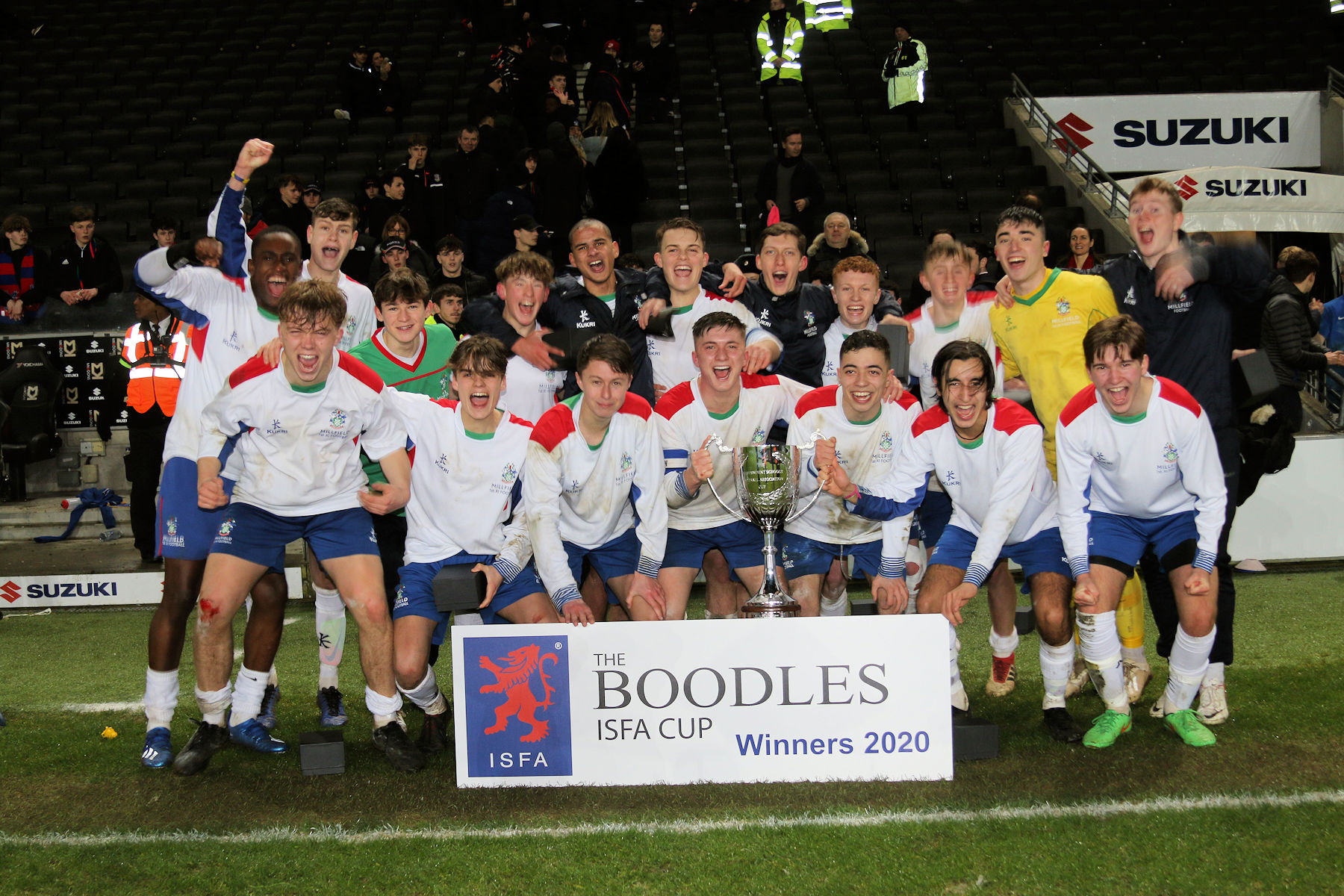 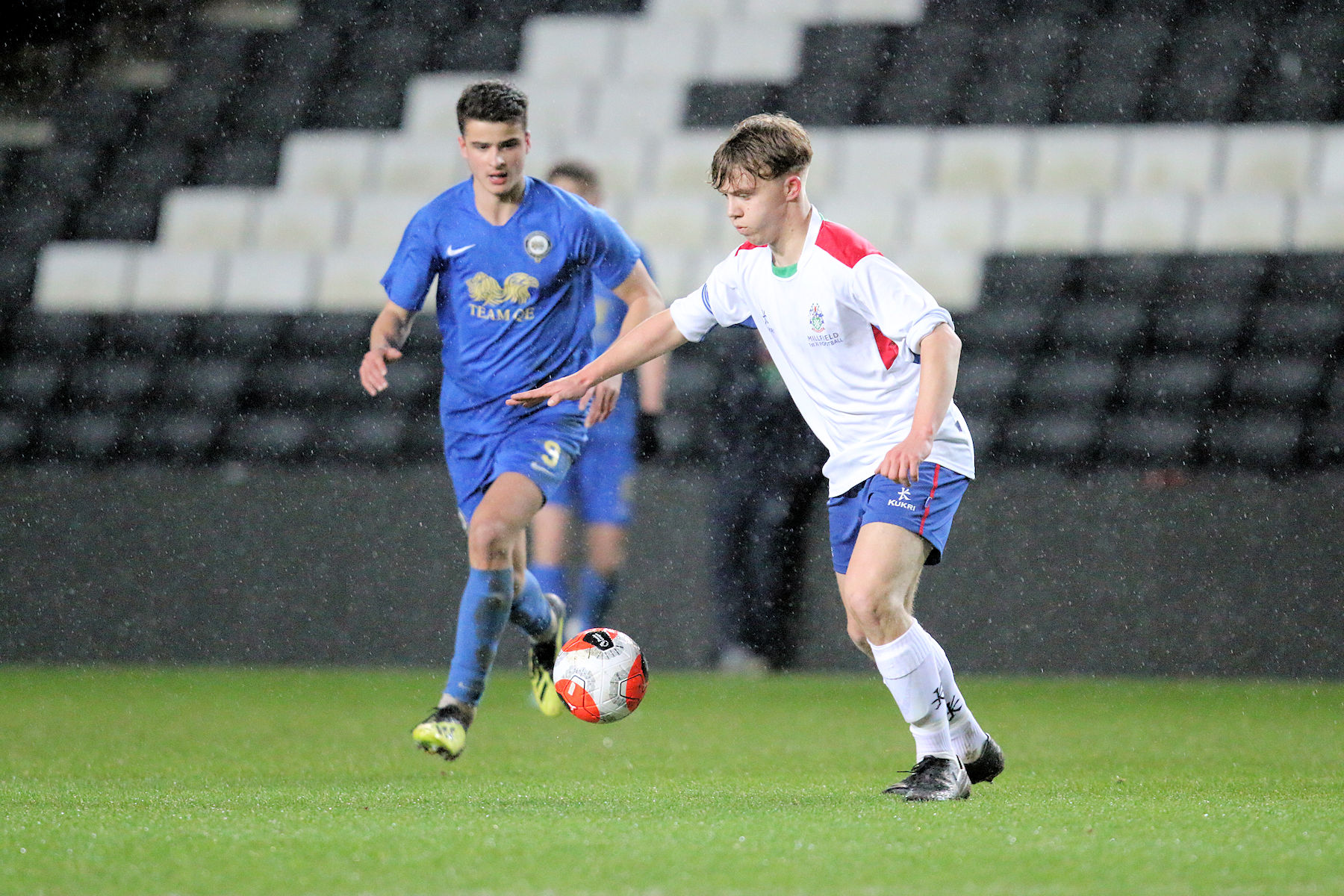