On a beautiful  day, 12 qualifying teams made the trip to St Georges Park to take part in the Smith Construction U13 Girls National Final.

Split into 2 groups of 6, the teams would play a group match which would then decide the semi-finalists, with the top 2 teams progressing.

In Group A, Kings High got off to a good start, winning their opening game against Cheadle Hulme, meanwhile Latymer Upper and Lingfield played out a draw in their opening fixture. Stephen Perse also got off to a winning start in their opening game against Scarisbrick Hall. Chigwell continued their winning form in their next  group game against Scarisbrick Hall. Meanwhile, Latymer Upper started their winning account in their second game against Cheadle Hulme. This was the start of their winning streak in the group stage, winning all their remaining games to top the group. Meanwhile in the fight for the remaining qualifying position there was no shortage of goals. After a slow start Cheadle Hulme found their rhythm, winning their final three games ending on the same points as Stephen Perse, meaning that second qualifying position was to be decided by goal difference, with Stephen Perse claiming the spot with a two goal difference.

In Group B,  Ardingly got off to a winning start, narrowly beating AKS Lytham in their opening fixture. Farringtons also got off the mark in their opening fixture against Belmont Mill Hill, while Surbiton secured their opening win against Repton Prep in their opening game. Surbiton continued their form into their second group game against Farringtons, meanwhile AKS Lytham got off the mark with a win in their second game against Belmont Mill Hill. Surbiton continued their winning ways, having an unbeaten run in the group stage to top the group. The race for the second qualifying spot was hotting up, with a 2 team race between Repton Prep and Farringtons after both teams had won 3 matches and lost one each, the final group game between the two teams would decide who made it out of the group. In a closely fought game it was Repton Prep who came away 1-0 victors to secure the second qualifying position.

In the first semi final, Latymer Upper took on Repton Prep. It was 0-0 after full time, taking the game to a penalty shootout to decide, with Latymer Upper coming out the victors.

The second semi final saw Surbiton take on Stephen Perse, with Surbiton continuing their unbeaten run to progress to the final.

In the repeat of the South East regional final, it was a close game with end to end play and both teams showing great determination to win. Latymer Upper managed to find the opening goal followed by a quick second. Surbiton came back quickly to make the score 2-1, but Latymer Upper were able to hang on to the lead winning the game, crowning them the Smith Construction ISFA U13 Girls National Champions. 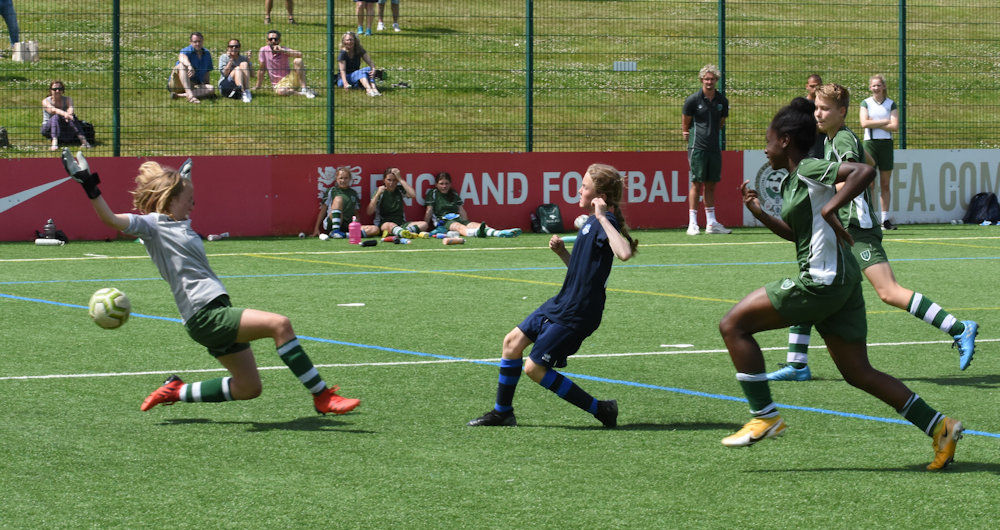